At 30 weeks into their pregnancy, Sara and Todd were so excited to get a 3D glimpse of their second child, a boy! And they were even more excited about the idea of sharing those pictures with 2-year old Sapphire, who was just weeks away from becoming a big sister.

"Sara's pregnancy had been perfectly normal up until the day of that ultrasound," according to Todd. "But the technician heard an irregular heartbeat, and that's how we found out our son had a life-threatening heart condition."

So the couple made the two-hour drive from Kingman, Arizona to Las Vegas to consult a specialist. Testing revealed frightening news the couple just wasn't prepared to hear -- Sara's own antibodies had started attacking the baby's heart.

The problem was so serious that Sara was admitted that same day to Sunrise Hospital where she would have to stay until the baby was born. And their newborn would have to undergo surgery minutes after his birth. A social worker from the Children's Heart Center arranged for Todd and their daughter, Sapphire, to stay at the Ronald McDonald House, so they would be just minutes down the road from Mom instead of two hours away at home.

The family had not planned to stay when they came for Sara's medical appointment, and now they were going to be away from home for the next several weeks at least. "The people at the Ronald McDonald House go out of their way to help. They had new clothes for me and for Sapphire, and lots of new toys, which of course, Sapphire loved!" When baby August was born six weeks later, Todd was by Sara's side holding her hand through the whole procedure. 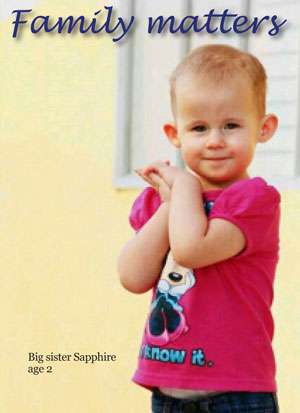 Right after August was born, the doctor held him up and said, "Here's your big baby boy!" When August let out a loud cry himself, Todd thought, "That has to be a good sign, right?"

But while Baby August survived his last six weeks in the womb and his birth, his biggest challenge was just minutes away – surgery to implant a permanent pacemaker. Fortunately, August sailed through the surgical procedure and is recovering nicely. "I've always been a super hero fan. Superman and the Incredible Hulk are my two favorites." Being six and a half feet tall with a large build, Todd fancies himself to be a lot like the Incredible Hulk.

"I have the feet to prove it," he says laughing, "and now my son does too!" But August already has another super hero nickname. "With a pacemaker, he's destined to be Ironman. So, now we have two super heroes in the family!"