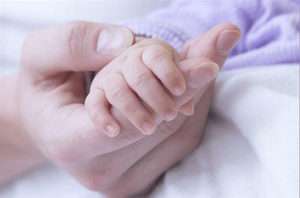 Seven years, that is half the life of Ronald McDonald House Charities of GreaterLas Vegas. For long time staff at the House, seven years can seem like it passed very quickly. But seven years of longing for a child is different. And after seven years of longing, Kylee and Brandon decided to adopt, to love and cherish a child entrusted to them. After waiting so long, they spent eight months in the adoption process and another 30 days waiting for final approval, anticipating several more months of waiting for a child. But suddenly, it happened. A baby boy was born, the final approval for adoption came through, and WOW! This birth Mom picked Kylee and Brandon and just like that, within days, they were parents!

"We started to cry; we were both so emotional. We were happy and scared too," said Kylee. "We didn't know much, just that he was breathing on his own."

The couple quickly got in their car in Salt Lake City, UT and drove eight hours in snow storms, stopping to buy a car seat on the way. Kylee admitted that she didn't even pack everything, leaving her hair care products behind. They spent the first nights in hotels where they were not comfortable. Then a healthcare professional recommended them to Ronald McDonald House® where they could be at ease and rest while caring for their new baby boy. Born at 31 weeks gestation and weighing just 3 lbs. 10-ounces, baby Lucas needs time to gain weight.

The couple is staying at Ronald McDonald House, visiting Lucas each day, talking to him, taking care of his laundry, and loving him through his delicate days. He is up one and a half pounds, weighing 4 lbs. 6-ounces. As soon as he passes what is called the Car Seat Check and is able to keep a 2-ounce bottle down, doctors may release him, Kylee reported. Kylee has quickly become an expert on premature baby needs, explaining the Car Seat Check is a test for premature babies where they must be able to sit in a car seat for an hour without breathing assistance, insuring they can get enough oxygen on their own and that their hearts are also OK.

She also explains that premature babies are often not able to keep their formula down and it is important that Lucas keeps 2-ounces of his formula in his stomach for at least an hour so the doctors know he will be able to maintain his weight and continue to grow after leaving the hospital. As she gives updates to grandparents and Ronald McDonald House staff, nurses tease Kylee that they are going to need to pay her because she has learned so much. "Ronald McDonald House has been great. Staff check on me every day, asking me if I've eaten. Donna makes sure I have what I need to wash Lucas' clothes and each staff member knows our names and asks about Lucas," said Kylee.

Marla, Kylee's Mom, sent a thank you note to Ronald McDonald House, saying "Words cannot express my appreciation for you and the Ronald McDonald House! Thank you for taking care of my daughter and son-in-law so they could be here with their new tiny son." Adopting parents sometimes stay at Ronald McDonald House when their new babies need special medical care. This gives the babies the love and support they need and helps the family start building bonds with new infants during these precious early days of life. Ronald McDonald House becomes a special place in these new parents' hearts as they treasure their babies while at their "home away from home."