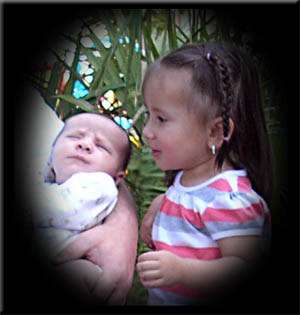 The Roland Family stayed at Ronald McDonald House for a little more than a month in March and April of 2012. When the Roland family recently came to stay at the Ronald McDonald House in Las Vegas, their newborn son, Steven, had just been diagnosed with a heart condition that would require surgery to save his life at just seven days old. His mother and father, Robert and Laura, both from the town of Sparks, in Northern Nevada, also brought their 18-month old daughter Georgia with them to stay at the House. Georgia’s smile and big brown eyes weren’t the only reasons our staff instantly fell in love with her.

Her middle name, “Estrella,” means “Star” in Spanish, and like the stars in the night sky, Georgia lights up every room she walks into. It wasn’t long before little Georgia was running around the Ronald McDonald House like she owned the place, giggling, laughing and playing with the other children. But while little Georgia was happily distracted and had no idea that her baby brother was fighting for his life in the hospital, Steven’s parents had the weight of the world on their shoulders. With the family facing an extended stay in Las Vegas, Robert had to ask his employer back home for extra time off.

"There always seemed to be more questions than answers with Steven's condition and yet another setback with every bit of progress he would make, Robert says. "But we knew at the end of every long and stressful day at the hospital that we always had a place to come home to and dinner waiting for us. I can't tell you how much that meant to me and my wife, especially because we had Georgia to take care of too. After more than a month with Steven in the Intensive Care Unit, the family finally got the news they had been waiting for. Baby Steven was healthy enough for the family to return home. "I don't know what we would have done without the Ronald McDonald House, Robert says.

The staff and other families were always there for us when we needed our spirits lifted. We honestly felt like they were going through Steven's ordeal right alongside us. We will never forget them!