Skip to content
You are here: Home » Family Stories » A Baby of Their Own!

A Baby of Their Own!

Against the odds – an Australian couple overcomes distance, time, and two battles against cancer to make their dream of having their own baby finally come true!

Susi Gross and Paul Doyle met as two young first-year teachers in Australia. The couple married in 2004 with the dream of starting their own family right away. But that dream was shattered just a few months later when Susi got the devastating news that she had breast cancer and would need to undergo chemotherapy.

A fertility expert wisely suggested they freeze several of the couples’ fertilized eggs – 11 little embryos they could implant following Susi’s cancer treatment. Just when it looked like Susi’s health was in the clear, and the couple could move ahead with plans to get pregnant -- lightning struck twice! Susi was diagnosed with a rare separate breast cancer, forcing her into another grueling round of chemotherapy.

Several more years would pass before the couple could even try to conceive via invitro-fertilization. However, Susi’s body, worn down from so much chemotherapy, simply would not cooperate, and each implantation resulted in a negative pregnancy test. With only 11 embryos to work with, each failed attempt left the couple heartbroken.

“It was so depressing to hear the news each time,” said Susi. “Here, we had survived cancer twice with the hope of having children, and it just wasn’t happening.” With only six embryos left, the couple discussed the idea of surrogacy, but because compensated surrogacy is illegal in Australia, they knew they would have to search for a surrogate in another country, which would increase the costs considerably.

Still, Paul and Susi would not give up hope. The couple decided to invest all they had left -- emotionally, physically and financially -- into finding a surrogate in the United States who would agree to be their “tummy mummy.” And they did! “She was a wonderful mother of two already, who had this deep rooted desire to do good,” Susi said. “And she really wanted to help another couple have a family of their own,” Paul added, “And that meant a lot to us!”

With their hopes running high, the initial testing after the first implantation was positive. Their enthusiasm soared, only to find out 12 days later, the pregnancy did not take. Paul and Susi had one final chance – with one final double implantation – to make their dreams of parenthood come true. Again, the initial pregnancy test looked good. “But we had been disappointed so many times by then, that we were afraid to get our hopes up, so we tried to remain cautiously optimistic,” Susi added. It wasn’t until the surrogate reached the end of her first trimester – 12 weeks into the pregnancy -- that Susi said they finally exhaled and thought, “Okay, this might actually be happening!” 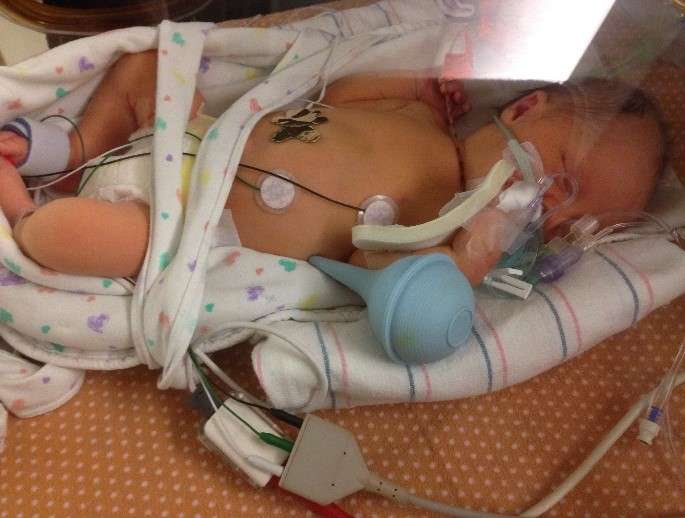 Now, with an actual due date, Paul and Susi had much to plan for -- including a long-distance trip to Las Vegas to witness the birth of their child – a little girl to be named Miriam. But baby Miriam apparently had plans of her own. She decided to arrive six weeks early, just 34 weeks into the surrogate’s pregnancy. Two weeks before Christmas, Paul and Susi received a phone call from the woman carrying their child, letting them know she had gone into early labor – and the baby’s birth wouldn’t wait for Paul and Susi to catch the next flight to the United States the following morning.

Fortunately, due to the marvels of modern technology, Paul and Susi witnessed the birth of their daughter live via SKYPE before packing their bags and heading to the airport. “It was the most amazing thing watching this little person we have longed to bring into the world for so long being born,” Susi said. “It was like falling in love all over again for the first time,” Paul added.

24 hours later, Paul and Susi were holding their daughter Miriam in their arms at the neonatal intensive care unit at Spring Valley Hospital in Las Vegas. And no one can deny the striking resemblance between mother and daughter.

Knowing how far away from home these new parents were, a hospital social worker told Paul and Susi about the Ronald McDonald House, and they made a referral for the couple to stay at the House. And so, the day after Christmas, with their newborn daughter in their arms, the Doyle family walked through the doors of the Ronald McDonald House for the first time.

“It was so incredibly welcoming and warm” Susi remarked. “Everyone welcomed us with open arms and open hearts. It really has been a beautiful human experience to be able to share our joy with so many other people here at the House. “

Paul said, “I can’t even imagine what it would have been like trying to take a newborn to a hotel room, whereas here it is a real home. It is so comforting, with everything from the home-cooked meals to the loving attention to detail that all of the staff has.”

Over the next several weeks, baby Miriam continued to grow big and strong, and as the couple prepared to leave the Ronald McDonald House to return home to Australia and to all of the family waiting to welcome them there, Susi and Paul summed up their stay by saying, “This whole experience has really moved us – this feeling of being so cared for has turned what has been such a difficult journey into such a remarkable pleasure!”